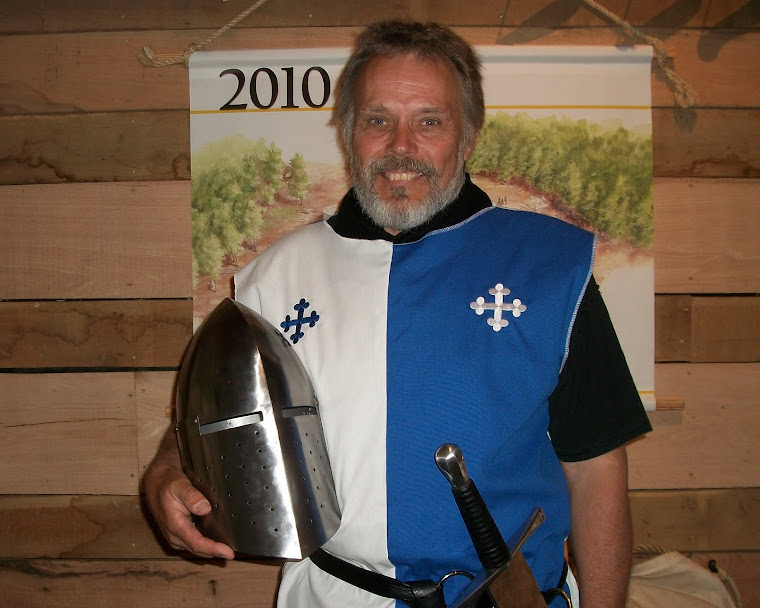 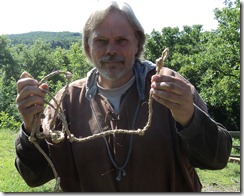 “How did they measure on the job in the Middle Ages?”  “What is the 13-Knot rope?”  Guests at the Ozark Medieval Fortress have asked these questions and many have added the request to give some examples of how to use the 13-knot rope.  The Middle Ages predates the use of the metric system in France.  That was introduced after the French Revolution which is after the American Revolution.  They used the standard system which now people in the U.S. think means “American”.  It doesn’t.  It means human system.  The “inch” was the width of a man’s thumb.  The “palm” was four fingers. The “hand” was the width of the flat hand including the thumb and is still used to measure the height of horses.  People were smaller back then and the “hand” was four inches. 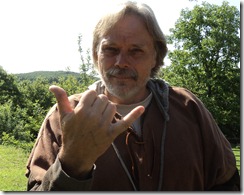 The heart of the system was the extended tip of the thumb to the extended tip of the little finger.  In French, that’s the “empan”, a term heard often at the Ozark Medieval Fortress.  In English, it is called the “span”, and in German it is “die Spanne”.  That is the measurement of the gaps between the knots of the 13-knot rope.  Of course, the “empan” of people differed, but on a carpentry job the empan of the Master Carpenter was the measure for all the ropes used on the job.  On a masonry project, such as the castle, it was the empan of the Master Mason.  At the Ozark Medieval Fortress, the empan is that of Michel Guyot, the French founder of the project.  At the rope maker hut, there is a board with pegs set at his empan so all the 13-knot ropes they make for the laborers are the same.

Medieval women thought in terms of the span because their lives were so tied to making textiles and tunics.  The benefit of the span is you can “walk” your hand in making measurements.  Many elderly ladies on tour have said they remember their grandmothers measuring with the span.  Incidentally later in the 1800’s with steam power at the mills and plentiful material ladies measured by the “yard”, from their nose to extended hand.  Men more commonly measured by the two-span, or “foot”.  That, of course, is 12 inches.  Most U.S. men still see things by the foot, except for some teenagers who play football and see things by the yard.  Three-span is a “cubit”, which was also considered the distance from a man’s elbow to fingertips.  In the Bible, Noah used the cubit to measure the Ark.

It is likely that Noah did not just use his arm to measure the beams for the Ark, but also a rope.  Use of a rope to measure goes way back.  In the Egyptian pyramids, workers are pictured using a rope to measure with eleven knots, creating ten spaces.  By the Middle Ages, we know they used a rope of 13 knots, creating twelve spaces and that the spacing was the “empan”.  Basically, the reason for twelve spaces was that it was as high as the peasants and laborers could be expected to reliably count.  There were no schools, but they were in Church each Sunday.  In the Christian church, twelve is an important number.  For example, there are twelve disciples.

The 13-knot rope in the Middle Ages was used as a tape measure, geometric compass and protractor.  As a tape measure, a laborer could measure a stone, for example, to be two span, one hand and an inch.  The opening of a door might be six span or a log might be cut at the full twelve span or even using the ropes of two men end-to-end for a full 24-span.  The walls at the Ozark Medieval Fortress are 10-span wide. 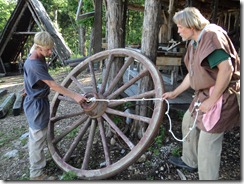 The 13-knot rope uses a loop as the first knot, which makes it easy to use as a geometric compass.  The loop can by an eye-splice or a simple overhand knot.  The curve of an arc, or even a full circle was easily made by using the end loop of the 13-knot rope as a center and selecting the appropriate knot for the radius.  The builders knew the value of arches from the Romans and many were used in the Middle Ages.  Remember also that a new technique took over the whole French theory of building in the 1100’s called the “ribbed vault”.  That’s what they used on the cathedrals, which is a whole different story, but my point is that ropes were used for these, too.  Circles, of course, were important for the round towers as well as the making of wheels at the carpenter and blacksmith shops. 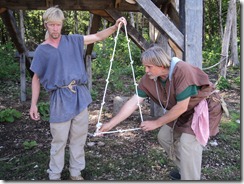 As a protractor, two workers would use the 13-knot rope to create geometric shapes.  A steep (isosceles) triangle can be made with 5-5-2 spaces.  Ship builders used this for the bows of the ships.  Roofers used this for steeples.  In general, it was known as a brace.  That is a term that now makes people think of a medical brace.  Old Western novels will say things like: “the outlaw held a brace of six-guns”, meaning two guns.  The brace was what was used where today Americans might use a post.  A brace takes longer to make, but the Medieval carpenters made things strong and a brace imitates the architecture of a man standing on two feet.  They felt that design came from God and was worth imitating.  The rope of one carpenter laid out the triangle.  The rope of the second carpenter was laid up the middle of the triangle and they were able to mark the steep angles necessary for the cuts to make the two beams, or legs, meet perfectly at the top. 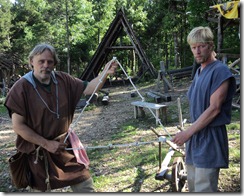 A bridge triangle or roof  triangle (equilateral) appears with three sides of four spaces each (4-4-4).  This triangle was used when a wider base than a “brace” was needed. Such as on bridges.  This triangle also makes an excellent steep angle for roofs that won’t leak whether covered with tile in France, slate in Germany or thatch in England.  Remember that in the Middle Ages they did not preorder roof trusses, but rather cut their own and therefore had attics.  If you look at a picture even now of a city like Amsterdam you see steep roofs of this angle.  The steep roofed carpenter’s hut at the Ozark Medieval Fortress uses this triangle and it is expected that it will be used on the castle tower roofs. 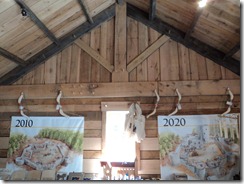 Modifying the triangle to ten spaces with four on the base and three on each side (3-4-3) gives the famous Egyptian pyramid triangle.  This was used for roofs, bridge bracing and even the plumb bob level of the Middle Ages.  This is the roof angle that has been used on the Visitor Center at the Ozark Medieval Fortress. 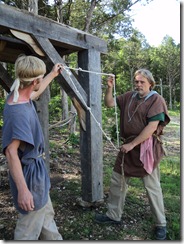 A right angle (90 degrees), which is so valuable as a poor man’s square can be made with the 13-knot rope easily.  It is 3-4-5 spaces.  This crates a right triangle.  With the right angle triangle, they created square doors, tables, shutters and windows.  Ship builders could have true perpendicular thwarts and masts.  The buildings at the Ozark Medieval Fortress, such as the blacksmith shop, carpenter shop and stable/barn were laid out with this triangle and are, therefore, square in the corners.  The beams for the elevation of the pit saw near the carpenter shop were cut perfectly using the 13-knot rope as well.

The laborers of the Middle Ages were primitive but skilled, industrious and clever.  We often underestimate them.

Posted by Medieval James at 8:10 AM 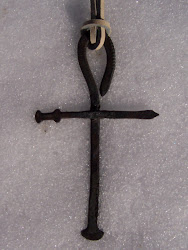 For more information and the current hours of operation, click here.

Benefits of garlic are timeless. They are Medieval and Modern. Check it out at www.WondersOfGarlic.com

Medieval James
It is my pleasure to serve as Historian and Guide at the Ozark Medieval Fortress, Lead Hill, Arkansas. My Bachelor of Arts degree was in European History and German at the University of Wisconsin, where I also obtained a Doctor of Law Degree. Between college and graduate school, I attended a summer program in Germany on the Middle Ages.